A CE mark is a logo and Declaration of Conformity which is affixed by the manufacturer to a product to indicate that the product conforms to certain safety requirements in the Building Regulations in the country where the products are intended to be used.

The United Kingdom Cast Stone Association (UKCSA) has been involved in recent years with the BSI, and other industry bodies, in clarifying the Scope of BS 1217, the British Standard Specification for Cast Stone, and any potential conflicts it may have with BS EN 771-5, the European Standard for “Manufactured stone masonry units”. The results of our findings indicate that the only clear requirement for CE Marking is for standard sized ashlar blocks, which do fall under the requirements of BS EN 771-5 and legally require CE marking from 1st July 2013.

For Further guidance UKCSA has produced a “Cast Stone CE Marking Checklist”, and a “Standards & CE Marking Requirements for Cast Stone” document, which are both available to download below, and should be read together with the European Commission’s “CPR 07/07/1” document, which expands on the definition of derogation. 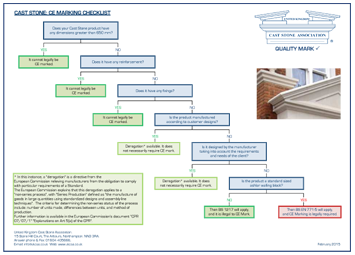 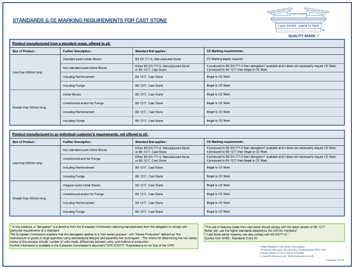 All units greater than 650 mm in any dimension, or containing reinforcement or fixings, will remain under BS 1217, and as this is not a harmonised Standard there is absolutely no requirement for these products to be CE marked and it would be illegal to do so under the current regulations.

The United Kingdom Cast Stone Association was also involved with the British Standards Institute during 2013 in a complete review of British Standards BS 5642 :Part 1, Sills, and :Part 2 Copings. In February 2014 the BSI re-issued the two parts of BS 5642, and they now state that Cast Stone sills, copings and cappings “shall be made in accordance with BS 1217”. BS 5642 is not a harmonised European Standard and therefore it is again illegal to CE Mark to either part of this British Standard.

It should be recognised that many of the alternative Standards have performance criteria that fall well below that set by UKCSA and its members.

Cast stone products manufactured by an UKCSA Full Member to the Association’s stringent requirements and specification are already supplied to a standard in excess of the BS 1217 requirements.

The BSI themselves have stated “CE marking itself is not about quality, nor is it intended to convey any meaning to specifiers, purchasers or end users who are, after all, reasonably entitled to assume that what they buy from a reputable source is legal”. They go on to state “the CE marking indicates that the manufacturer has met the minimum legal requirements for their products in regard to health and safety under European Directives. CE marking is not, therefore, intended to be a quality mark”.

However, in 2013 the UK Cast Stone Association introduced its own Quality Mark Scheme for cast stone, which all UKCSA manufacturing members are required to comply with. The UKCSA Quality Mark gives further reassurance to users and specifiers of cast stone, that the cast stone they are using which has been purchased from an UKCSA Member is durable, and produced to the highest standards.

Aspects of cast stone which are covered by the UKCSA Quality Mark include: