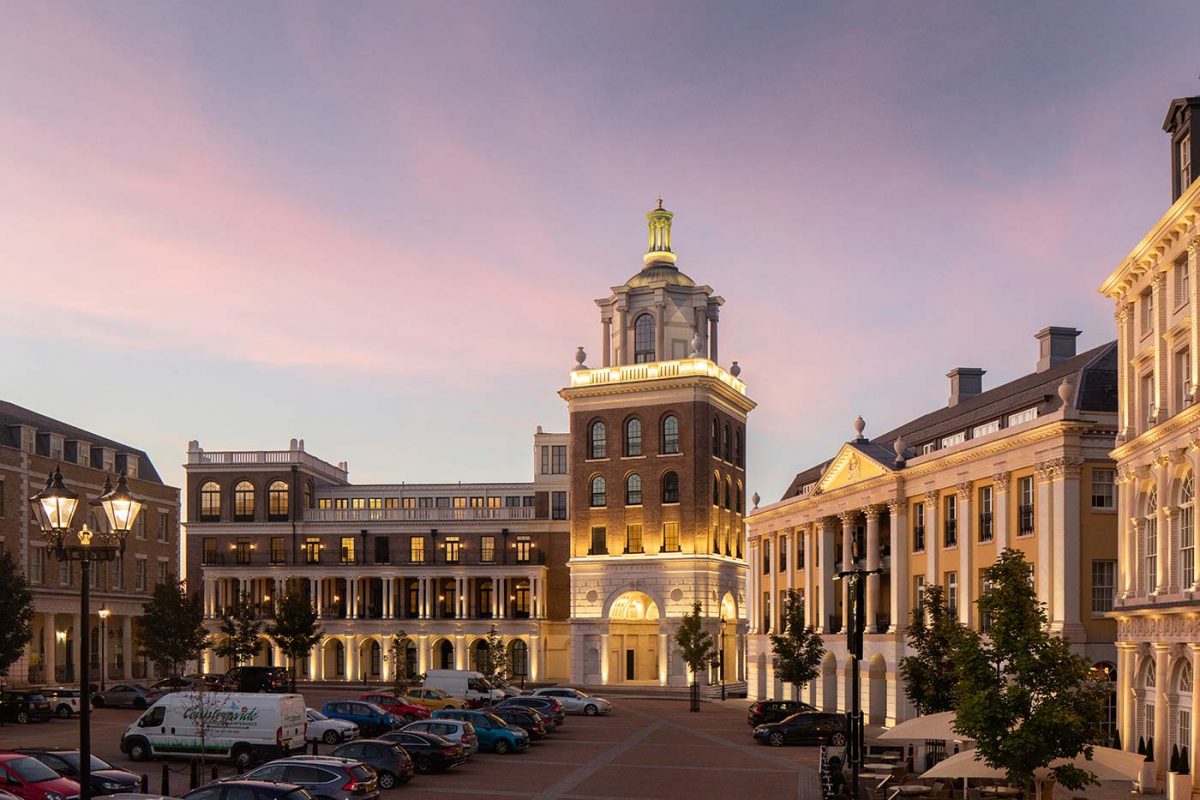 Cast stone fit for a Prince!

This most impressive building, being visible for many miles is the focal point for Prince Charles’ prestigious development of national importance. The apartments, enjoying unrivalled views of the surrounding countryside, have been built to the highest specification and, with UKCSA Full Member Haddonstone Limited‘s wet-cast cast stone elements to the fore no compromise was allowed on design or quality.

The design of the building was clearly influenced by the works of John Nash and Sir John Soane, incorporating classical and contemporary features and combining Greek Revival forms and details with Roman arcaded architecture. Meticulous attention to detail has created interesting façades which hold the attention and emphasises the opulence of the residences. The main building has a striking colonnade to the ground floor, covered terraces to the first floor and private open terraces above. The highest structure in this development is the tower to the South East corner which is fully clad with cast stone to the first two stories.

The ground floor to the main building features a plinth course of varying height, attached columns, an arched colonnade with subtle differences in design and contemporary balustrading. The cornice, apparently of a constant profile actually comprised six different depths to accommodate various construction details. The cornices and architraves to the first, second and third floors, while appearing similar in profile also enjoyed slight variations necessitating multiple mould production, far in excess of what would normally be expected.

To minimise site cutting the entablature components were all produced to length, sometimes only a few millimeters different all contributing to a complex jig saw of stonework requiring accurate casting, labeling and packing and it is of great credit to Haddonstone’s mould studio, factory and loading staff that that the project suffered minimal problems with the stonework supply.

The project also includes fluted columns to the first floor terraces, balustrading and custom finials to the roof terraces to the main building. The cladding to the tower incorporated plinths, pilasters, niches and massive arches and keystones with intricate moulding detail. The accuracy of the Haddonstone mould production is exemplified by the perfect alignment of the joints giving perfect transitions to the arches and smooth interiors to the niches.

Inevitably with a project of this size and complexity and with the fixing and other details often being designed as the project progressed there were issues with conflicts within the design but these were overcome promptly and efficiently to the satisfaction of all parties.

The resulting construction is justifiably a source of pride for HRH The Prince of Wales and the Royal Family clients, including The Queen who opened the building, the architect Ben Pentreath Ltd and the main contractor, CG Fry & Son. It also showcases the effective collaboration between the UKCSA Full Member cast stone manufacturer Haddonstone Ltd and the installers Henley Stone Specialists Ltd , structural design and detailers Smart Crosby International, and stainless steel fixings manufacturer and suppliers GA Fixings Ltd who are all UKCSA Associate Members.