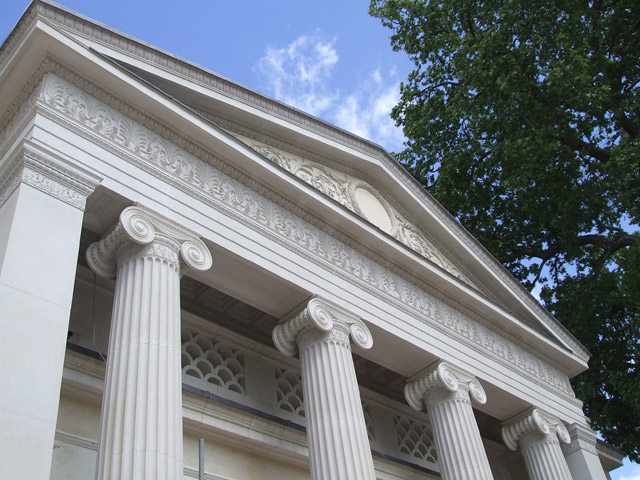 Ideal for ornate detailing, cast stone has been used to striking effect for the restoration of one of London’s grandest homes, the Nash-designed Hanover Lodge and its twin gatehouses in Regents Park.

The buildings were restored as closely as possible to their original condition by architects Quinlan and Francis Terry. High quality and meticulously detailed cast stone from UKCSA Full Member Plean Precast was used for the imposing classical portico to the front elevation of the Regency mansion. It was also used to form the classical porticos of the gatehouses.

The wet cast, acid etched catch stone simulates the appearance and performance of natural limestone. The project involved the reproduction of intricate mouldings to the Ionic capitals, fluted columns, decorated entablature, and coffer units to the ceiling of the mansion’s portico and pediment. Fluted columns and their entablatures provide an equally prominent feature to the gatehouses.

Maintaining the high quality finish demanded by the architects on such a wide range of ornate units called for skilled craftsmanship and meticulous attention to detail by model makers, mould makers and Plean Precast’s cast stone production team. It is fair to say that all concerned could be proud of their achievements.