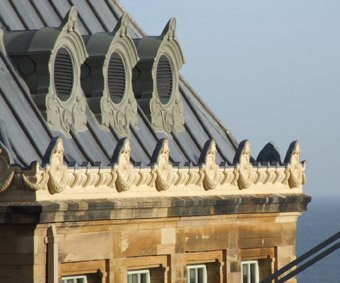 UKCSA member Haddonstone has won the 2010 Gold Award (Building Materials) for Environmental Best Practice and Sustainable Development in the prestigious International Green Apple Awards presented by The Green Organisation for their supply of an intricately detailed cast stone parapet to replace damaged stonework around the ballroom of this Victorian building has won .

The Spa overlooks Scarborough’s South Bay and the original terracotta was badly eroded after decades of exposure to saltwater and wind off the North Sea.

Haddonstone first took moulds from the best remaining examples of the existing stonework in situ, which were then brought back to the studio, where plaster models were made from them. The plaster models were then built up and recarved to recreate the intricacy of the original designs before further production moulds were created. Finally, the new Haddonstone pieces were cast from these moulds.

As this important building is grade II* listed the cast stonework had to meet the requirements of various heritage bodies.