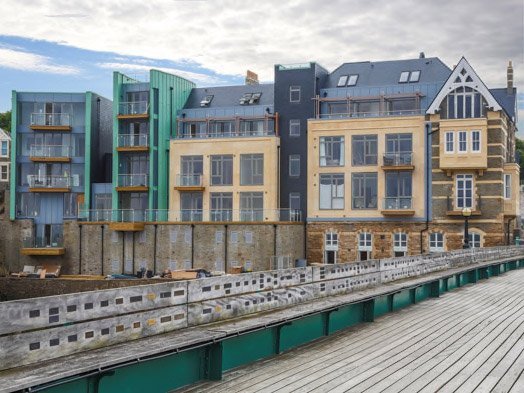 Situated in the Victorian Seaside resort of Clevedon on the Severn estuary, this residential project consisted of both a combination new build and refurbishment for the conversion of the former Royal Pier Hotel. Located adjacent to the Grade 1 listed Clevedon pier this project and development was viewed with keen interest from both the public and local planners and the scheme was approved subject to tight planning constraints. The former Royal Pier Hotel had fallen into a state of disrepair and dereliction and had become an eyesore to the ‘coastline’.

The development started in 2014 and was competed in the spring of 2016. The builds extended timescale being a result of the complexity of ‘stitching in’ new build features into the partial existing features.

UKCSA Full Member Marshalls Bricks and Masonry (formerly GreconUK) supplied wet cast stone product throughout the project which included, band courses to profiles that matched the existing stone components, box bay windows and ‘supporting’ corbels, and scripted and plain rebated panels which formed the main façade on the rear elevation. In addition to surveying and matching the profiles of existing components, that also included modifications to suit existing build coursings, it was imperative that the colour / appearance also matched the existing ‘cleaned’ stone.

For the latter stages of the project additional copings and cappings were supplied to the boundary walls and piers.

The box bay windows were constructed off cantilevered steel frames and accordingly consideration had to be given to the stone restraint system to maintain sufficient differential movement between the frame, stone features and main building façade. The corbels were restrained using anchor channels and are independent of the bay above.

The façade cladding to the rear elevation had to be sympathetic to the ‘Metsec’ frame it was to be fixed to. Sections needed to be reduced whilst maintaining spans and appearance to ensure loadings transferred to the frame were kept to a minimum. Access was also limited on the rear elevation and accordingly consideration was given to the panel size that had to be suitable and practical for the installation whilst maintaining the important visual aspect of the finished panel.

Marshalls Bricks and Masonry worked closely with the design team to achieve the revered result.

Due to location and degree of exposure that the product could be subjected to, special consideration had to be given to the depth of cover required when suggesting suitable sections and in addition stainless steel reinforcement was used throughout.

For all involved the completed project sits proudly amongst its more famous neighbours, making its own positive mark on a former derelict site.