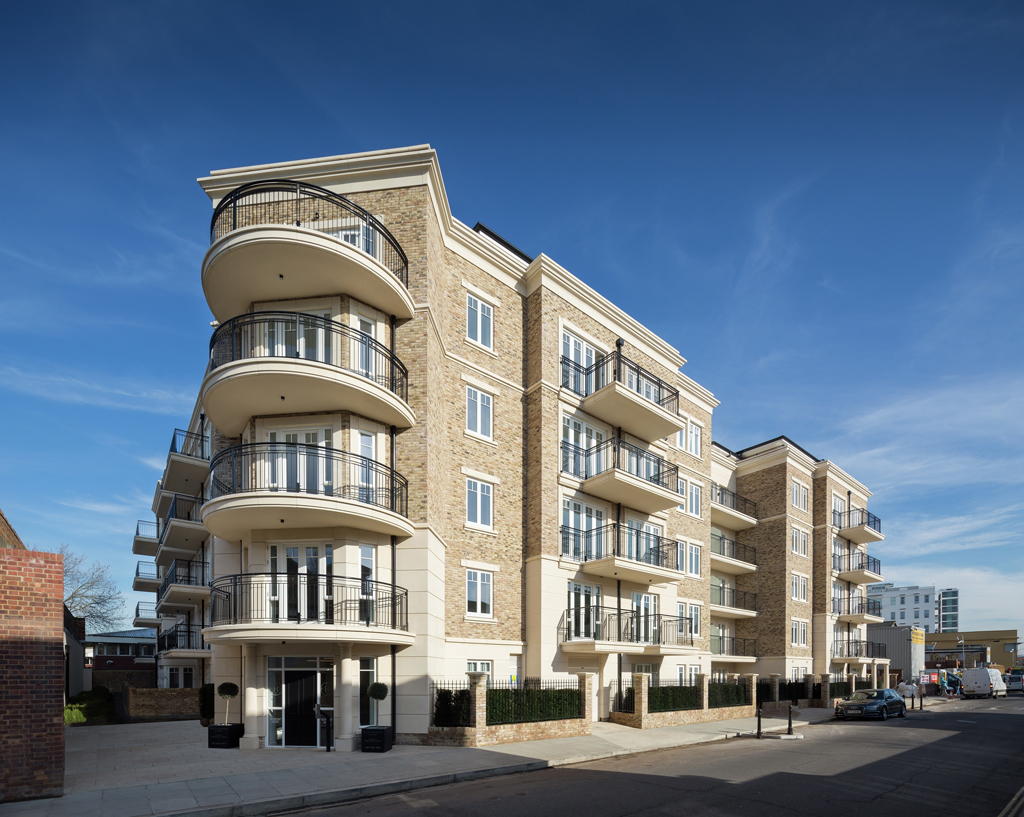 This stunning residential project utilised wet-cast cast stone supplied by UKCSA Full Member Marshalls Bricks and Masonry (formerly GreconUK) over a period of eighteen months concluding in the summer of 2016.

Cast stone was used to highlight key features of the building on all elevations including the prominent main entrance. The scheme located in the borough of Hammersmith and Fulham consists of one, two and three bedroom apartments and came about in direct response to the demand for residential accommodation within the borough.

The design brief was to include a well-proportioned and thoroughly considered scheme which enhances the various streetscapes with a form that harmonises with the surrounding context. The area had been a mismatch of residential and low rise industrial and commercial units that had in part lost direction to the detriment of the existing surrounding residencies. The project is built upon former low rise industrial units thus reinstating and enforcing the new direction and local planning briefs.

The cast stone manufacturer had to undertake a higher level of project management on the scheme as the site was limited in both access and storage. The building itself commanded a large footprint and the main frame was completed before the external cladding was erected. High levels of co-ordination were employed to ensure components were supplied elevation by elevation on lift by lift as work progressed.

In addition to the full window surrounds, columns and feature bands, custom oversize blockwork was supplied for adjacent to the main entrance, balcony cladding bands and the roof level cornice and copings. The cornice at roof level was supplied in lengths of approximately 2.4 to 3m and as per the fore mentioned tight restrictions to site and limited storage, the manufacture and supply of these cornice components were required to be co-ordinated critically with the build programme to ensure the correct pieces arrived on site in the correct order. Failure to do so could literally bring the build to a stop. The cornices were supplied continuously over a period of weeks from commencement to completion. Fixing solutions were also sought to restrain the top heavy units that offered 3 dimensional tolerance to ensure line and level across the installation.

The balcony cladding proved to be a further challenge as the in-situ concrete backing complete with upstand was to be clad with a combination band coping , T shaped in section that had very limited working space and a special fixing system had to be developed between main contractor, subcontractor, the cast stone supplier and specialist fixing supplier. The cast stone supplier also undertook a site survey with the main contractor to establish and confirm the curved work to the balconies above the main entrance to ensure a consistent ‘fit’ to the structure.

In addition to the above, all the balconies required special pieces that maintained a smooth transition from the adjacent feature band to the coping, whether as a continuation of line or to include perpendicular or irregular angles. These transitions had to take into account building movement joint positions or include special joints for the ‘floating’ balconies.